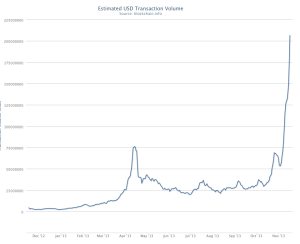 If only there was a currency where velocity was greatly improved by technology. Alas, there is! Bitcoin.

Bitcoin has already hit record highs for transactions, matter of fact some calculations say the entire bitcoin (BTC) market exchanges hands every 10 days. That is something most governmental currencies do only a few times a year.

Even if 50% of that isn’t actually transactions but unspent outputs, the market cap of bitcoin is still being turned over every 10 days… This, compared with the USD whose money velocity is 4-5 times per year.