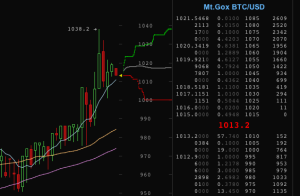 The value of a single bitcoin has finally broke through the $1000 mark, again for the 5th time on the popular exchange Mt. Gox.

As we trend up, this may be one of the last times we see prices under $1000. The following chart has been largely accurate at predicting the price of bitcoin.

2014 holds a lot of promise for a major increase in the price, possibly hitting $10,000 by mid year. We have seen a large amount of big business adoption from billion dollar companies like Overstock, TigerDirect, and even an NBA team. I believe we will really see mass adoption ramping up throughout the year, shocking even the most bullish bitcoin advocates.