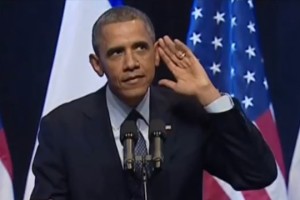 Here’s a story recently related to me by a guest at a White House dinner, which included Google’s Eric Schmidt: The president, whose most important job is surely to protect the integrity of the monetary system, smugly asked Schmidt if Bitcoin, one of many growing challenges to currency hegemony, was anything he had to worry about.

– From a USA Today article titled: How CEOs are Clueless About Technology

If the above is accurate (and I have no reason to suspect it isn’t), it is priceless information on so many levels.

First of all, rather than ask about Bitcoin in an inquisitive manner free of prejudice as a enlightened leader surely would, Obama is merely primitively wondering if he needs to “worry about it.”

Actually Barry, if you had any sense and foresight whatsoever you would be looking at it as a great opportunity. An opportunity for the nation to lead the way in growing the Bitcoin economy and shed the archaic, feudalistic monetary system we are currently enslaved under. However, since you work directly for the oligarch money manipulators themselevs, you are clearly and disastrously unable to see things in a more productive and beneficial way.

Second, as I highlighted earlier this year, Eric Schmidt had no clue what Bitcoin was when Julian Assange first mentioned it to him in a lengthy interview in 2011. The initial exchange went as follows:

Assange: On the publishing end, the magnet links and so on are starting to come up. There’s also a very nice little paper that I’ve seen in relation to Bitcoin, that… you know about Bitcoin?

Assange: Okay, Bitcoin is something that evolved out of the cypherpunks a couple of years ago, and it is an alternative… it is a stateless currency.

So Obama is asking Schmidt for his advice about Bitcoin, when Schmidt had no idea what it was two years after it had been created and released into the wild. One bureaucratic control-freak asking another for advice. What could possibly go wrong?

More from the USA Today article:

The president surely believes his important expertise is in matters of policy, law and political machinations. But he is, too, the chief executive of the U.S. government, with its increasing dependence on digital performance. And, in that area, he seems a near-illiterate, or at least a big boob.

It is certainly a pertinent question: If the government can’t run an e-commerce website, how in the world can it process all the data that they are supposedly sweeping up to spy on outlaws and citizens?

Non-tech people, no matter their good intentions, can’t do tech, at least never as well as tech people do it. This is something ever-more evident to people steeped in daily digital life, as most Americans are. It is less clear to CEOs, many of whom are somehow still uncertain in their digital habits and reflexes.

Let’s just hope these clowns don’t grasp Bitcoin until it’s already way too late…which fortunately it may already be.

In case you missed it the first time, I discussed these issues and many more in my interview with Adam Levine of Let’s Talk Bitcoin back in August: http://www.youtube.com/watch?feature=player_embedded&v=sZWhrSSAU9g